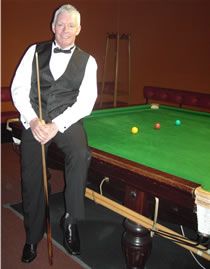 Improve Your Snooker with Jim Donnelly

Hi Jim,
I thought I should let you know that after this weekend I have reached number 5 in the rankings. I would like to thank you for the coaching and getting me there.
Thanks

Hi Jim,
I would just like to thank you for your excellent coaching over the last few months. Your knowledge and understanding of the game from club amateur to professional level was apparent after the first lesson,  I found your methods of teaching easy to understand, and appreciate your help. It helped to find that my basics are ok and that my cueing/timing of the shot was often wrong.

Your fan system was very easy to understand and explains how you can move the white around the table for position.
You have a good coaching system where you have split it into sections from basics, the fan system to advanced play, break building to competitive play. After every lesson there was a lot to take in and it gave me something to work on after each session. I’m now looking forward to playing competitive and putting 50+ breaks in, my goal is to put 100 break in. Although that’s down to me to put in the practice, with help from what you taught me.

I would highly recommend Jim Donnelly as a coach to any one playing the game, no matter what level you are.
Many thanks Jim

Since my sons snooker coaching lessons began six months ago, Jim has raised my sons’ game far into the next level. It’s a pleasure to know and work with Jim and my son and I look forward to may more invaluable sessions.
Robert Dunlop, Scottish Snooker Member, Kilmarnock

Just after four sessions with Jim my knowledge of the game has vastly improved. Jim is an excellent snooker coach and a nice guy. The coaching sessions were superb and well worth the money.
Richard Gillies, Rileys Snooker Centre, Aberdeen

Jim’s knowledge of the game is truly frightening and that level of information is matched not only by his patience but by his eagerness to help people succeed.

Jim’s unique snooker coaching methods allow you to see where your going wrong even when he’s not with you, allowing a degree self development whenever your at the table.

He took me from an 8 break to close to an 80 break and you really notice the difference in your game, even after one lesson.
Martin Gartle, Cue Club, Glasgow

My session with Jim made me understand how the cue ball works with a very understandable and easy system called ‘The Fan’. With his help I raised my game and gained the consistancy I wanted.

For the few months I have been working with Jim my game has improved a lot. My break building has improved considerably as has my safety play. It is a privilage to get coached by Jim and I would like to thank him for that chance.
Arron Coates, Darlington Snooker Centre

In the past three months I have had six hours snooker coaching with Jim, and I am quite amazed at the improvement I have made in such a short space of time, considering that I have been playing snooker for a number of years and could not understand why I was not improving. Only for the help of Jim I was intending giving up playing snooker as the frustatraion was getting too much for me. Thankfully I didn’t and after working with Jim my break building has increeased substantially and more consistently and I am back enjoying playing again.

A few months ago, my son and I expressed an interest to each other that we’d both enjoy a game of snooker occasionally to have some quality father/son time together. He is a final year student and I split my time between photography and teaching so it is very difficult to find a window when we’re not busy.

After a few frames at our local golf club, we both found it a little frustrating due to our (particularly my) limited skills. Rather than giving up at the first hurdle, I went on to the internet and discovered Jim’ Donnelly’s name, offering to coach beginners or people whose skills had long disappeared. After a chat to Jim, my son and I drove down to Glasgow for a two hour snooker coaching session that was to lead to us playing and enjoying three or four games a week.

Jim is a skilled teacher. He analysed our weaknesses in terms of stance, cueing and rhythm and deconstructed our flaws, (mine considerably greater than my son’s). He then rebuilt everything to the point where we could go back to Stonehaven and practise, secure in the knowledge that we had been taught the correct methods in a way that left us both feeling that we wanted to play regularly.

As a teacher myself, I can appreciate Jim’s communication skills, always insisting on the course member learning by doing rather than watching. The basis of Jim’s method is to have a solid foundation, practising based on sound technique and developing a feel for every shot.

Both my son and I love playing snooker together now and I’m amazed at how many games go to the final black ball. This keeps us both motivated. Neither of us wants to play in leagues but Jim’s undoubted skill has opened up a completely new and hitherto undiscovered way of having a very pleasant hour or so together, two or three times a week. We both value this time hugely and I thoroughly recommend a few hours wih Jim to anyone who finds themselves in the same situation as us. You won’t regret it.
Andy Hall, Stonehaven

During my two coaching sessions with Jim, he was able to correct my stance, bridging and timing. Jim sorted out my technique in the space of a couple of hours. I was also shown how to use Jim’s ‘Fan System’ which has improved my positional play immensly, and I now feel very confident and looking forward to increasing my break building quite a bit.
Sean Riech, Inverness

I profited a lot from your coaching in Glasgow. As I go along I can see the improvement in my playing. You’re a patient coach and I really liked your “Fan System” This is crucial for positional playing. I practice everyday and I’m gradually losing my old habits day by day and this gives me the best satisfaction. But I still have a long way to go to get it perfect. Maybe I’ll see you one day again and for sure I’ll take some more Snooker lessons.
Thanks a lot Jim.
Regards
James Chen, Switzerland

First of all I would like to thank you for the great time I had in Glasgow and at the Q club. You made it special as I was not expecting a professional coach would take me out for a sandwich and carry on discussing about snooker or organising few frames with Michael and Dunlop,I realy enjoyed that.

The week I had in Glasgow made me discover and understand a lot more about snooker.  I now understand how does the “white” works and what I am doing at the table. While practicing on my own, I can correct myself when I am doing something wrong and I am getting more and more efficient and confident.
I still have a lot to do and I know it will take time but things are coming together as my cue action is nearly automatic (It’s a huge difference on the quality and success of every shot!!!).
I really enjoy reproducing the exercises you gave me as I can see the evolution session after session.

My regrets about the week I had would be:

– A lot of informations to take in one week. The week after I just didin’t want to play (but you are not responsible of that because there is so many things to go through)
– I wish we could had more time on the tactical part because it’s so interesting.
– I wish I could had a few frames with Allan MacMannus and Stephen Maguire.

In conclusion, I think I will come back to verify the last two points mentionned above.

As I said to you the first day, “I don’t have time to practice 20 hours a week but I need you to help me working smarter” and that’s what you have done by your approach of the game and the passion you have for it.

Thank you Jim and I will let you know regarding my different results.
Dimitri

Many thanks for a thoroughly enjoyable days coaching. I have had a chance to practise the exercises you set, and already I’ve managed to hit the straight blue 7 out of 10 times.

Just recently had a days coaching in Glasgow. Jim has a very professional and patient approach to coaching, giving you a great deal of confidence in your ability. He managed to sort out my timing and had me hitting shots I wouldn’t normally consider. Jims unique ‘fan system ‘ really helps you to understand about positioning the cue ball. Now looking forward to my next league game with renewed confidence. Paul Meredith, Grantham Billiard Club
Again Many thanks Paul Meredith.

Just to back up what I said leaving the Q Club today, I really enjoyed the lesson and felt so much of a change in such a short time. I’m not long back from a couple of hours practicing what you taught me and I enjoyed hitting the ball more than ever.
I worked through the routines you gave me then spread the reds for some fun, time and again I was knocking in 8 or 9 reds with colours before I broke down, A huge improvement for me I can’t believe it!

I will definately be working on everything I can remember from our lesson and I’m already looking forward to another days coaching with you. I’ll be in touch to sort something over the next few weeks.
Derek Pattison

I was very fortunate to spend a day with Jim recently at the Q club in Glasgow. Jim’s in depth knowledge of the game, was evident from the beginning, and his explanation of the ‘fan system’ was easy to grasp and understand.

I managed to play a few shots that I would normally have not thought possible. Under expert guidance, Jim had my technique under the microscope, and managed to explain that my timing of the ball was not what it should be. This insight has proved invaluable, and has made me examine and correct my striking of the ball.

I would have no hesitation in recommending Jim if you wish to improve YOUR snooker!
Brian Dobson